You guys have already heard me talk about how much I love the TV show The Vampire Diaries. Aside from having wonderful and consistent romantic tension, splendid characters, and fantastic plots—all things that are very essential to the makings of a good show—I’ve been able to pinpoint more specifically what makes this show so good.

It’s a fantastic device that works well to create well rounded characters, show excellent character development, and help the story get better and better as it continues. (How many times have we been disappointed by a second or third season of a show—or a sequel to a book series—because it wasn’t as good as the first one?) The Vampire Diaries only gets better with each succeeding season—something I can’t really say for any other show.

I’m now going to talk about “the bigger bad guy” and how TVD uses it. *Spoilers may be below up to the third season.

First, take a look at this guy. 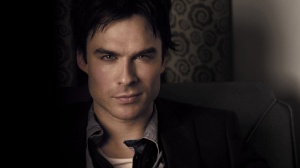 This is Damon Salvatore, our antagonist for season one of TVD—well part of season one. His brother, Stefan Salvatore, has just moved to Mystic Falls, your average small town. Except, of course, for the fact that there are vampires and other mystical creatures—a very creative town name on the creators’ part, I know. Damon has promised his brother an eternity of misery, so he follows Stefan around to try and make his life hell. At the moment, that mostly includes ruining Stefan’s budding relationship with Elena Gilbert. Oh, and Damon also has a secret agenda to reunite with his one true love, Katherine (Elena’s doppelganger), whom he believes has been stuck in a tomb for 100 years, give or take.

Now check out this chick.

This is Katherine. Turns out, she wasn’t stuck in a tomb. She’s actually been just fine out and about living her life. Damon’s crushed at first, but once he falls in love with Elena (whoops), he moves on. This is when Katherine makes her appearance and starts making it her agenda to make both brothers’ lives miserable. So now Damon is a good guy (most of the time.) He helps Stefan and Elena out as they try to get rid of Katherine.

Now at this point, things are a little harder to follow, so I’ll summarize even more.

Elena gets kidnapped by Rose. 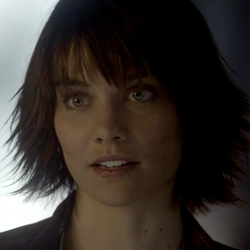 Rose assumes that Elena is Katherine (another whoops), which is why she kidnapped her in the first place. Katherine sort of helps to get her back. But before that happens, Rose takes her to this guy.

Elijah needs Katherine as a bargaining chip. You see, his brother Klaus has been holding his brothers and sister as undead hostages in coffins. Rose eventually tries to help the rest of the gang fend off Elijah and provides information on these scary brothers. Turns out that Klaus is even scarier than Elijah.

And eventually Elijah joins the team to try and stop Klaus, who is basically unkillable. Our ultimate bad guy.

Note that there are many other bad guys throughout the TV series. I’m just trying to give you guys a taste of what I’m talking about.

But now on to the main points I’m trying to make. There’s always a bigger bad guy. This enables each episode to be better than the last. Because the stakes are higher (vampire pun intended), and the conflicts are more intense as the bad guys get badder and more powerful.

It’s also fascinating to see characters undergo such change. The bad guys become good guys as their goals align with the good guys’. They don’t always become perfectly good—they still have their fun flaws, but they do change in remarkable ways that are exciting to see.

Now, TVD isn’t the only show out there that’s doing this. Look at Loki’s character in the second Thor movie. Look how he aligns with Thor to face a bigger bad guy. Look at Spike in Buffy the Vampire Slayer. These changeable bad guys are everywhere. And look at how much we love them! These are the characters that have the most fan girls—just saying.

Sometimes looking at where characters are going can help you solidify who they need to be at the beginning of your story. This can help with rounding out characters and their development. And it also makes for some interesting plot turns.

Earlier this year I went to LTUE (Life, the Universe, and Everything—a symposium for science fiction and fantasy writers). While there I listened to a presentation on creating effective villains. One thing in particular that I learned was that bad guys can’t be bad just for the sake of being bad. In other words, every story needs a villain (whether tangible or not) and that villain needs to be three dimensional. He needs a back story. He needs motivation. He cannot be doing bad things just because you need a bad character. He needs to be driven. And as is mentioned several times in the Writing Excuses podcast, the villain needs to be the hero of his own story.

And even if you never explain the back story, the complexity of your characters will come through in your writing. Because the more you know about them, the more it shows.

As I started brainstorming for the last book I wrote, I tried to think of ways to make my bad guys more complex. Somehow this morphed into me creating a list of motivations for bad guys.

Here’s a list of the 12 motivations I came up with as well as some of my favorite bad guys to illustrate my thoughts (and please note that motivations are subject to change throughout the story—so these are characters who at some point during the story possess this motivation. And yes, these are mostly movie examples because it’s harder to get pictures of characters found in books. But the principles can be applied to both, and really, who doesn’t love pictures?).

—For his third wish, Jafar wishes to be “an all-powerful genie!”

Sauron from Lord of the Rings 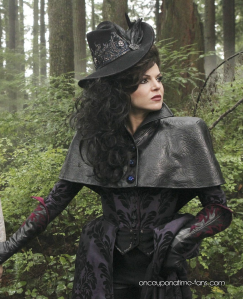 Regina/Evil Queen from ABC’s Once upon a Time

—Regina wants revenge against Snow White. I won’t say why though. If you haven’t seen this show, you SHOULD go watch it right now.

Imhotep from The Mummy

—Imhotep killed the pharaoh because he had the hots for his wife.

7. Prove themselves/A desire to be the best at something

8. True belief that what they’re doing is right

Valentine from City of Bones—for those of you who don’t know, Jonathan Rhys Meyers is playing this role in the currently unreleased movie

—I don’t want to spoil anything, so I’ll just say that Valentine fights for his cause (as wrong as the rest of the characters think it is), giving up all that he has for it.

The Joker from The Dark Knight

—I think this one is pretty obvious. Oh how I miss you, Heath Ledger.

—Loki is jealous of his older brother, Thor.

—Magneto believes that mutants are better than humans and persecutes them.

12. Greed/Wanting something so badly that you’re willing to do anything to get it

—In this case, the object of her desire is the heart of a star. Another example is Cruella De Vil from 101 Dalmatians, her motivation being a puppy fur coat.

After doing this I discovered that what made my villains more complex was giving them a variety of motivations, but it’s also important not to get too crazy. Too many motivations can just make the story confusing.

Now when plotting, I simply look at this list and decide what I want my bad guys to be like. It helps with constructing the conflicts and plot as well because character driven stories develop conflict when opposing personalities collide.

Can you think of any other motivations? List them in comments below and tell us some of your favorite bad guys.